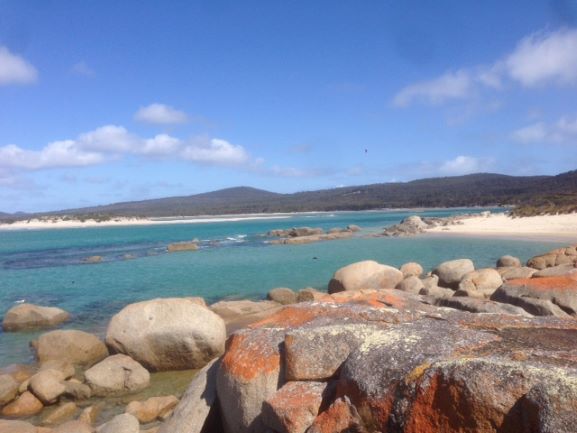 Monday: It’s a week since the pub closed but today I really feel like they lopped off a limb. Not only have they cancelled the amateur mutton-birding season, they’ve closed most of the beaches. We are still allowed to go for a walk, with just one other person. But the best walking spots on Flinders, operated by Tasmania Parks & Wildlife and used by us like extensions of our back yards, are taped off like crime scenes. It’s never happened before. 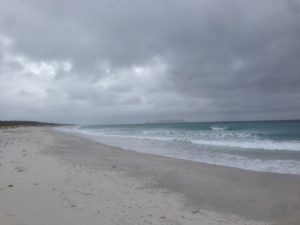 Word has it that a couple of young blokes kayaked from Melbourne to the north end of Flinders Island. They were met by our policemen, Chris and Ryan, and deported. That’s the first time, I think, the word has ever been used in relation to an event on the Island: deported. But there’s a lot of firsts happening.

Tuesday:  A yacht appears from between Big Dog and Little Dog Islands; it is motoring towards the wharf. When I finish the piece of work I’m doing and look up, it’s gone. I later hear that those aboard were turned away. Turned away from the friendly isle, another first. Of course, they were offered a food and/or fuel drop if they needed it, before being sent on their way.A Facebook Post: the golf club has just been closed. On our course, a busy afternoon sees a dozen people teeing off (and not at once) and it’s closed despite the Premier saying golf is OK so long as there were only two people per group and proper social distancing was observed.

A Facebook game: A community member posts ‘Guess the Song’ with a clever drawing that illustrates, maybe, fifty songs. Maybe fifty Flinders people play over the course of the evening with gusto. And we feel connected.

Netflix won’t load. I knew I was keeping the final two seasons of Game of Thrones unwatched on my hard drive for a reason.

Though it is silent here, I try, for the first time, to rework some lyrics (with apologies to S&G). I can’t get past the first verse:

Guess you’ll be here ‘til the end

Because the days are slowly creeping

And the nights don’t see much sleeping

For the fears, that are planted in our brains

Amongst the sound of sirens.

Wednesday: The Golf club has reopened, for just two at a time, spaced appropriately apart. A friend with a golfing husband breathes a sigh of relief.

My cousin finally answers my increasingly panicked emails: he works in New York. I am grateful that he is living.

The library, usually open two days a week, has closed. Just when people might need it most.

Alison and Maxine post: ‘April Fool’s Day is cancelled because the whole freaking year is a joke’. And after Australia’s drought and fires and now this, I wonder why we can still raise a smile.

But I am lucky. Here the virus has not appeared (so far). I have food, shelter, water, wine. I have books, chocolate and the internet is, mostly, working. And, though my family are far, I have my community for support. They listen as I complain that, for the first time ever, I have a bleach-burn on my finger.