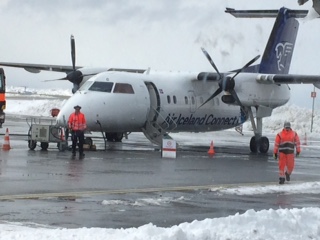 A Greenlandic fisherman hacks up litres of phlegm from his lungs each morning in my hostel. A harsh, explosive sound that ends with the kind of a snarl you might hear from someone who has slip 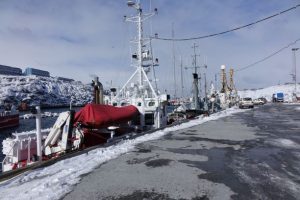 ped on the black ice, in a snowstorm and snapped their leg in two. It has a kind of inevitability about it.

I am the only non-Greenlander in the eight rooms. The fisherman has just brought a new boat in Denmark and steamed here via Iceland. Now he has two boats with which to harpoon whale and catch crabs. He shows me pictures on his phone of his fishing boats, a photo of large vats off big red crabs and, with equal pride, and a video of a whale his crew member had just harpooned was grappling aboard. The water swims with soft pinkness.

For the second only time in my life I’ve had to take multi-vitamins (the other time was in Chile). Here in Iceland and Greenland the best thing you can hope for by way of vitamins (unless you want to pay $20 for a salad or much more for a meal that has vegetables) is that there are onions and pickles on your hotdog or tomato and lettuce on your cheeseburger. There have been, at least in Iceland, some quite reasonable veggie options. Other, that is, than a vegan burger, pasta with tomato sauce or the inevitable fries. Museums comment on the lack of decent diet since the introduction of the hamburger. In the supermarket in Nukk, veggies come in large bags or bunches: too much for one person and, of course, far from cheap anyway. So, a breakfast of fruit (some of which comes in individual pieces), raisins and nuts has been my sanity. 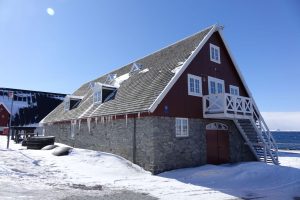 Inexplicably, there is an extremely good Thai restaurant here; I had fabulous, proper-tasting glass noodles with pork and prawn. There was onion and tomato, lettuce and coriander. I’ll be back tonight, hang the expense.

In Iceland yesterday it became, officially, summer. They have two seasons, that and winter. Sure, there was little snow left but I’d have called it spring. We still had to rug-up properly. In Greenland, however, it is called spring and I’m sure if you’re a local that’s well and good. For me it’s winter: the other day it was minus eleven. Over the weekend, my taxi driver told me with glee, it might be one. ‘Not minus,’ he said with a chortle, ‘One!’ Can’t say I blame him. Actually, I just looked up the forecast: it might reach four. Now I’m excited but I’ll be further north and it will be a few degrees colder.

On Sunday I might go dog-sledding and am hoping to be more successful at it than in Siberia. Actually, I’m just hoping the Greenlanders are kinder to me than the Siberian guide who made his dogs take off before I was ready and if, my fall hadn’t been broken first by my butt, I’d have had a concussion when my head hit the ice. He was playing up for a camera man from a local TV station. Obviously, their version of Funniest Home Videos, Candid Camera or some such. 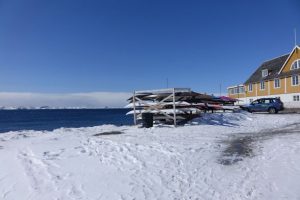 Last week the cousins and I were discussing, to put it politely, the hardiness of the Icelandic people. Really – and despite the beauty – we were asking ourselves how the hell can anyone live there and, perhaps more to the point, why. Well, times that by ten for Greenland, at least at this time (and most) of the year. In summer the top temp. is ten.  Great places to visit though. And this is not just me, at the museum (open a few times a week for the three hours each afternoon when people go out), I learned just how many times Greenland has been ‘depopulated’. I’d known that the Vikings lasted only a couple of centuries, but at least three populations of Inuit only lasted a few centuries each too. One moved to Alaska (will be researching that more). Off on the coastal ferry tonight to a town north of here called Sisimiut. More soon. 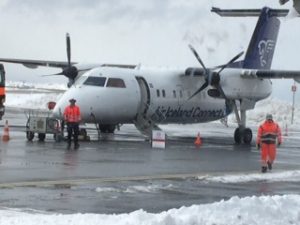