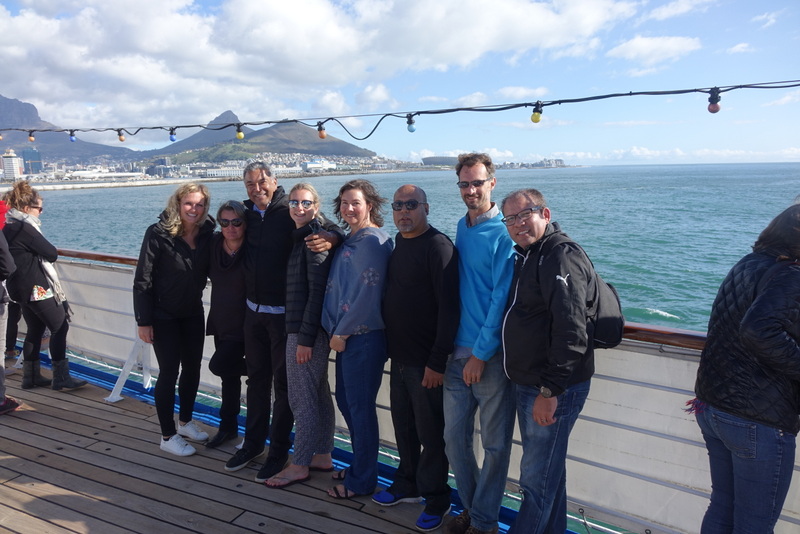 A bit more about the ship, on which I have now spent some 16 nights: 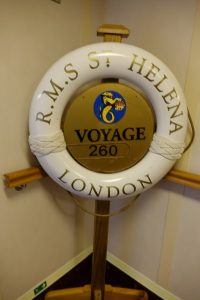 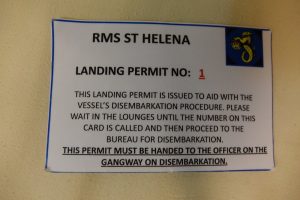 For our landings on both St Helena and Ascension, the ship anchors quite away from the port. We’re given Landing Permits that determine the order in which we travel by boats (they are more usually fishing charters or fishing vessels to shore. For the Ascension landing I am given Landing Permit Number One so I can make the most of my short time on the island (about six hours; thanks Terence). But before anyone gets off, some land staff need to come aboard.

There are two sittings for dinner; at the main sitting (8pm) an 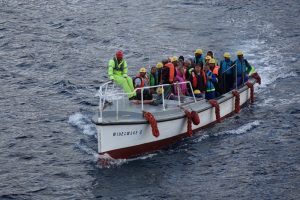 officer (usually) hosts each table. There are five courses on offer ending with a very good cheeseboard. If you don’t want the cheeseboard you can order, inexplicably to me, a savory course such as grilled sardines and tomato on toast or anchovies wrapped in bacon. To me those are more like entrees than a post-dessert course but it seems to make perfect sense to the Brits. 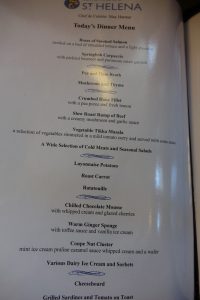 Each night (and for lunch) two soups are on offer: chilled raspberry, mushroom and thyme or pea and ham broth are three such examples; there are a lot of fruit soups. I didn’t try those. Then you can choose from two entrees: say a tandoori chicken skewer or beef carpaccio with pickled beetroot. Main course offerings always include a fish and a vegetarian option with a third being a roast or a casserole. Or you can choose to have a selection of cold meat and salads left over from the buffet lunch. There are at least three specialist deserts such as chocolate mousse, cherry flan, or cheesecake, plus ice-cream or sorbets. Last course is the a fore-mentioned cheeseboard and fishy alternative. Lunch is offered buffet style or in the dining room a la carte (a mere four courses).

To announce each meal sitting, a bell-melody is played over the sound system. This same melody is played by Saint FM, the radio station, when their announcers read the menus for the day. These are menus from restaurants and takeaway shops around town and in ‘the country’ and always include burgers and toasties. 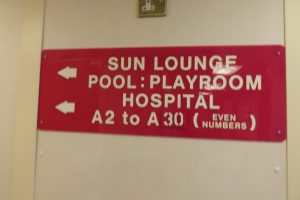 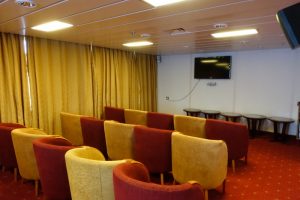 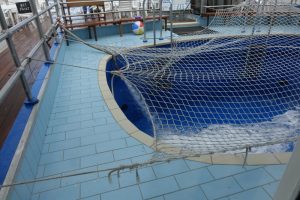 There are most services you need on the RMS: a shop, a hospital;, two bar/lounge areas, a small movie-theatre, a decently-stocked library, a small pool (closed sometimes due to rough weather), gym, good food and fabulous staff. And my thanks to all staff and crew of the RMS, you looked after me and my friends well.