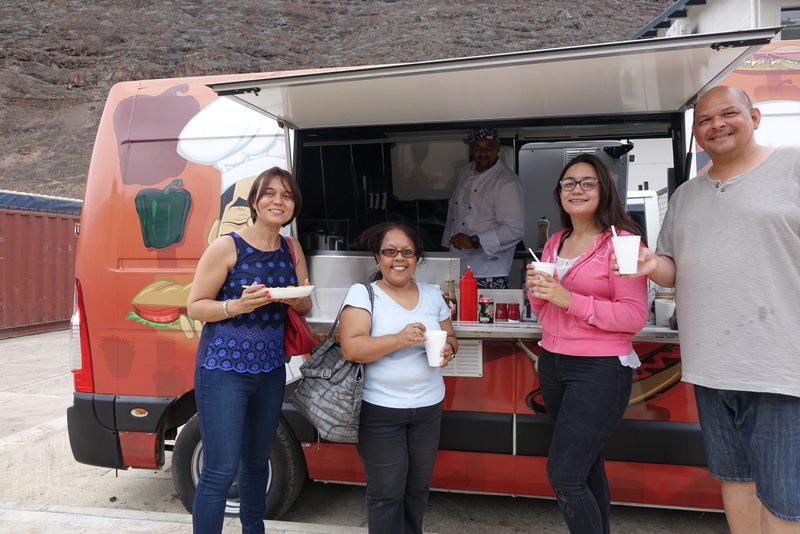 After a slight delay due to bad internet:

The first full day I was on St Helena Island there was a Family Fun Day with hot dogs and burgers and ‘plo’ (bit like a risotto). It’s one of the ‘national’ dishes. It was pretty bland. The second day I was on the Island I was taken to Julian’s: a food van that parks each weekday at the port area used by the airport construction company (around a cliff from the port area used by commercial ships, fishing boats and yachts). Julian’s served, that day, a mean beef and vegetable soup and the best ‘plo’ I have had on the island – one with chicken and chorizo. Who’da thought the best food on the island (so far) would be discovered on my second day and at a food van?

There are a number of tented food offerings including Sizzlers (featuring burgers, toasties and fried chicken) in the main town parking area outside The Castle (where government officials work). There a is nameless one that pops up on Tuesdays and Saturdays outside the library that has apart from burgers (it has no toasties), the odd wrap, and some very fine sausages in bread.

Tasty Bites: toasties (best I tried), burgers, and other main courses. It’s up at Half Tree Hollow above Jamestown.

Get Carters generally serves pizza of a Thursday to Saturday but I’m yet to get there before they have run out (arrivals keep getting earlier: 6.45 at last try). Stop press: on one of my last night I managed to order the last available pizza for the night and it was very nice.

There are two outlets for The Sandwich Shop (about fifty metres between one another). Apart from burgers and toasties they offer a basic breakfast menu and lunch specials (sit down and take away). And the all-important wifi (and thanks for your advice Derek, owner of The Sandwich Shops).

The Inkwell is a bookshop and café. It does wifi too but the sit-down part is in such an echoing room I haven’t been able to work there. Nice little bookshop though with a range of second hand novels and new books of all sorts for all ages. 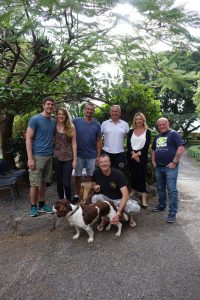 Above: My drinking peeps at Anne’s Place (and Amphibians, and the Standard, and the Mule yard and….you get the idea)

Then there are the two bars:

The White Horse Tavern is the rougher of the two except they don’t do rough on St Helena. Anywhere else I might be a little intimidated by the mostly-male company but the blokes welcome me as a newly discovered sister and regale me with stories of island-life and ensure I’m a bit too drunk to take those stories into my notebook.

The Standard: is owned by Sally who also owns the distillery and, newly, makes wine. Sally’s clientele is a mix of Saints (as those born here are called and who have extremely mixed bloodlines that include Malay, Indonesian and African), people who were not born here but now live here permanently and ‘TCs’ aka ‘Expats’: professionals and officials from the UK or South Africa whose foreign wages can be ten times or more than those of Saints (or other locals; sorry I didn’t get a chance to say goodbye to Sally, Mike, Denise and the crew).