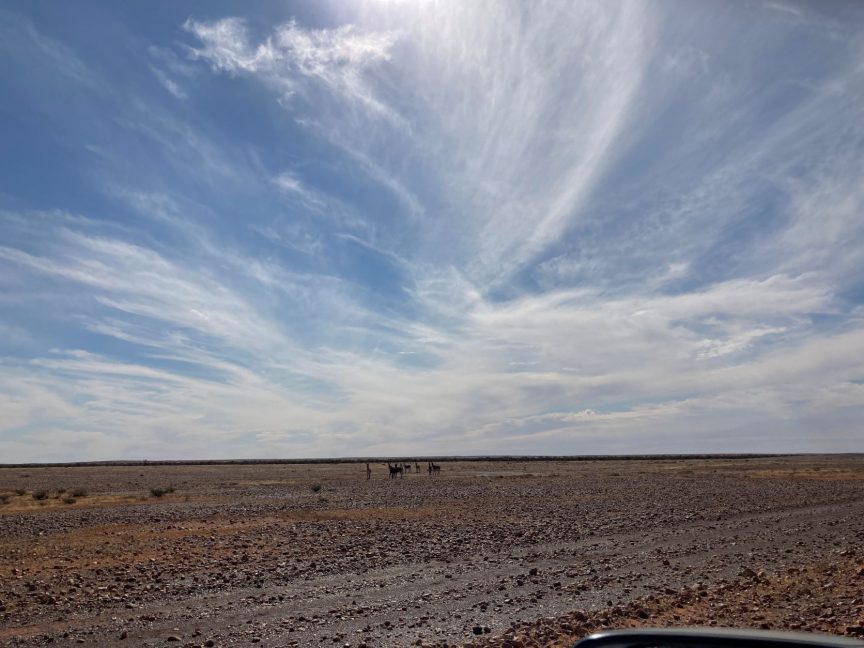 A trip through Central Australia

Sorry, not much time for words but here is a quick report on the Northern Territory Trip One: to the edge of the Simpson Desert, south from Alice Springs.

A warm wind blows off the MacDonnell Ranges. I’m in Alice Springs. It’s late August, the end of winter but still 30° and I’m loving the heat but not quite so much the dry (with my pale, soft southerner’s skin). It is so dry; saliva is stolen from my mouth by the very act of breathing.

Travelling with Charlie Carter and Deb Clarke on a trip south of Alice to the edge of the Simpson Desert. Charlie founded Trek Larapinta (now in different hands). He also used to work with my stepfather ,Martin, at the Central Land Council in the 1980s. None of this I knew when I booked a creative camping trip with him and Deb (an artist) that was subsequently cancelled. Instead, they decided to go outback on holiday themselves and invited me along (yes, jammy I know).

Lunch was generally under a tree just off the road (above) with a view like this:

Campsites were found by pulling off the track and bush-bashing to find a suitable spot. This is the view from my swag upon waking after our first night. The sun, as you can see, was brushing its fingers along the top of the dunes:

Andado Station is the biggest station in Central Australia (3rd biggest in NT). This is that first night’s camp from one of Andado’s sand dunes:

At risk of stating the obvious, we all did a lot of this:

Not an animal, I know from similar patterns at home on Flinders where the wind blows bracken ferns around in circles to make similar markings:

Below is Old Andado Homestead – now a museum (unattended, by donation). Molly Clark and her husband Mac used to live here before they built a new homestead on Andado Station, a bit further south. Then Mac died and Molly sold the station but kept Old Andado for her to move back into on her own. Here she died.

Deb loves taking photos of rust and here was plenty of rusty relics around the old homestead to choose from:

Look how the chrome has survived the desert and contrasts with the rusty body. Love it!

We’ll be turning left (south) but will eventually get back to this point:

We had just decided to extend our trip by a day & night and there appeared the Mount Dare Hotel. Deb and Charlie were bemused at my desire to spend a night in its camp-ground but some wonderful conversations were had with the few locals and travellers at the bar. As so often happens, there was one degree of separation: the bar manager knows one of my Flinders community-members. Then I had a night cap at the bar only to find I was drinking with three Tasmanian’s (who were not travelling together). I was also offered a job at the hotel (everywhere in Central Oz is desperate for workers).

Note to self: send a Furneaux Tavern stubby holder to the Mt Dare Hotel.

But the springs were exquisitely beautiful and we walked a circuit around the main pool:

A trek across a salt pan to another warm pool

(my iphone doesn’t do the colours justice):

OK, if you’ve made it this far here, me about to enter the glorious warm water (and to tame my hair):

Another afternoon, another camp by a road somewhere:

Not a bad lunch spot (by one of the few waterholes we came across) :

Lots of graffiti on ruins and lots of ruins on the Old Ghan Railway track where workers used to live:

Common sight, apparently the cars are turned over to better strip them for parts:

A town called Finke. It used to be a railway town, now an indigenous one. The sign on the left tells travellers to drive straight through the town, not to stop (Covid). Luckily, we were OK for fuel (then).

This is a gazetted road reminds me of home but a different colour and texture:

And then there were budgies (and budgies and more budgies):

Last swag spot (for this part of the trip anyway):

We climbed this (don’t look Dad):

Signs of ochre miners (white ones, they used to mine the ochre for camouflage during WW2):

So just before we ran out of fuel, we found a town that was open (and petrol bowers in cages):

The, when we got back to town, Alice was getting ready for Territory Day in the only place you can do this in the nation (and yes it was loud):