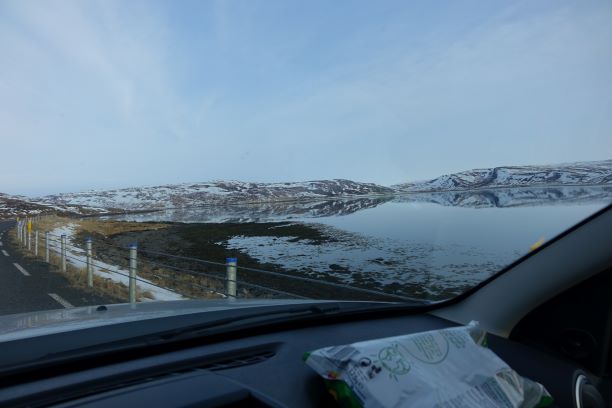 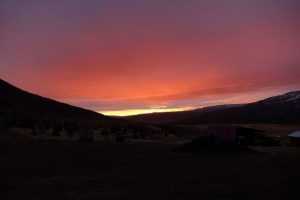 The first episode of ‘Fran Goes for a Drive in Iceland’ starts dubiously: I am suddenly asked, by email, to urgently put together a workshop outline (gee, my head so isn’t there), thus am late to pick up my hire car. The rental-car woman looks at me with admiration (or horror) when I say I’m going to the Westfjords. ‘On your own?’. ‘Yes, on my own.’ She decides to throw in a wifi dongle for no extra fee. ‘You’ll have to charge it,’ she says after finding that she couldn’t turn it on.

Shortly after ascertaining that I did indeed, know how to engage reverse gear (yep, the people in the car park looked at me very strangely but it’s one of those you have to choke left and upwards like a hangman’s noose not push down like drowning a kid in a swimming pool), the dashboard started screaming at me ‘beep, beeeep!, beeeeeeep!!’. A (long) look at the manual told me the tyre pressure sensor was on. Sigh. Called the car company: ‘yes hello, I picked up this car from you an hour ago and it’s screaming at me already and I’m going to some pretty serious landscape ON MY OWN and, like, having a car that WORKS might be useful’. The sceptical-sounding guy on the other end (either bored or harassed) said that if I checked the tyre pressures and they were OK then the light was faulty, and I should just drive. Yeah. Right. Thanks for that. Ok, so tyres duly checked (no, I couldn’t hear any leaks and probably wouldn’t have over the Reykjavik traffic). Apparently, the light being faulty is a ‘common problem’ and that’s supposed to make me feel better about taking a possibly faulty car into the Icelandic wilderness. 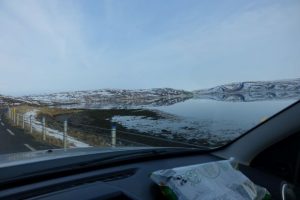 Even in Reykjavik, you feel the scenery. The only similar experience I’ve had is the Himalayas (not even the Antarctic landscape was so powerful, perhaps it was just too overwhelming). Everything you do is in the presence of an ice-topped mountain (or four). And me, as I drive towards them – on my own, on the ‘wrong’ side of the road — I’ve got a warning light, like a spectre, on my dash.

At the first stop, a town called Akranes, I want to visit the Folk Museum. There are no cars parked but it is still winter, so I only worry a little until I find a door with a sign ‘winter: open 10-5’. Good. Then I open it and find a bunch of bemused builders: obviously it’s renovation time.

In Borgarnes, I’m the only visitor at the local museum (it’s in the library and the librarian seems inordinately pleased to see me). For dinner I walk a couple of kms and pay some $80 (Oz) for a couple glasses of wine and a pizza but it was the best pizza I’ve had in a long time (possibly ever outside Italy or France) and there’s two pieces for breakfast. On top of that Riccardo, the owner, gave me a whole bunch of travel advice and then a lift home and no, it wasn’t like that (unfortunately: I love Columbians). 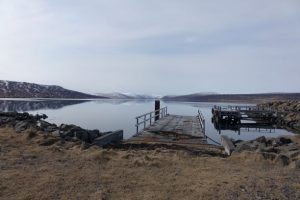 Day Two: The Settlement Centre in Borgarnes has two very well-presented exhibitions: one on Settlement and one on a local saga. I’m slowly getting the hang of sagas, thanks to Richard Fidler and his co-writer of Saga Land. Then a long drive to Holmavik in the Westfjords. My first pass (involving snow, mountains and valleys) was over the only one of four roads in that direction open to traffic.

The sound of tyres in Iceland is like crunching snow – it’s a similar sound to having a flat tyre. The tyres are studded you see, so they grip in snow. But they sound this way on bitumen too. This does nothing for my sense of well-being given the ghostly dash-light constantly glowing at me. The car – a basic four-wheel drive called a Darcia Duster — also likes to tell me when to change gears. I’ve been driving manuals for around forty years.

Everywhere in Iceland there is music playing and it’s all in English. Right now, I’m listening to Kate sing about Heathcliff and Cathy in a bar in the capital of the Westfjord region, but there’s a lot of Oz music too; it’s haunting me. In the car the radio fades in and out in, music from the 80s and 90s interspersed with Icelandic commentary I can’t understand but for the odd word (‘Julian Assange’, ‘Brexit’). More soon.