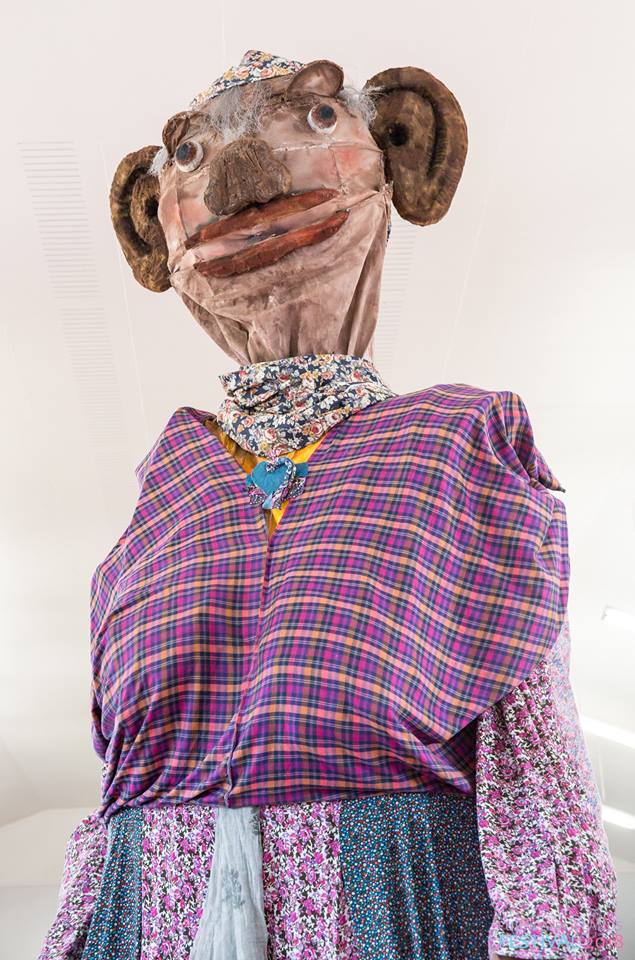 ‘Times change, and we change with them’

The three-day Furneaux Islands Festival, is, for many of us, is a time to get together to celebrate our community, nationality and lifestyle. The 2018 Festival began in true islands-style with a blackout and ended with a sing-along.

It was not a dark and stormy night but had been a hot and blustery day when one hundred (mostly) islanders gathered in the Emita Hall for the Acoustic Supper. From the kitchen tramped a team of black-clad waiting staff, like ants from a nest, depositing in front of each diner plates of either scallops with crispy prosciutto or ‘Island Morsels’. I’m certain the scallops were superb but was delighted to receive the latter. Toni Wood had concocted a wonderful tasting plate: the abalone fritter was moist and full of flavour and the Wallaby Ambrosia was soft as the best French pâté.

First in the entertainment line-up was female band muka nawnta meaning, in palawa kani, ‘Salt Water Sisters’. The women sang three achingly beautiful songs in language, a couple in English, adding a serving of spoons and a dose of fiddle at the end of their set. 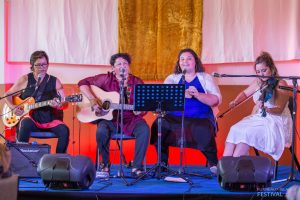 Flinders’ own Jaimee Warren was next on the bill. Accompanied by Chris Murphy, Jaimee began with a terrific rendition of Pink’s ‘Who Knew’. She closed with one of my favourite all-time songs, Adele’s paradoxically-titled ‘Set Fire to the Rain’.

Platters of beef, fish wrapped in banana leaves, with salads and roasted garlic potatoes had been served when Kyle Lionhart, visiting us from Byron Bay, rose from his seat next to me to take the stage with his guitar. Kyle played his final song after ripping the amplifier cord from his guitar, plopping his backside on the edge of the stage, and motioning us towards him. This took the gig to a more intimate and inclusive level.

That intimacy was – apparently accidentally – reproduced by the final act: Shane Howard from Aussie rock band Goanna who played with a couple of his musician-mates.  After a few numbers, some familiar to me some not, the power went out. Shane and his crew promptly launched into an irresistible ‘unplugged’ version of ‘Solid Rock’ that had lots of us dancing in the aisles.

It was – let me nail my colours to the mast – a wildly appropriate opening to the festival. A respectful stone’s throw away from Wybalenna, the site that is silent reminder of some of the horror of our past, was this event for endings and beginnings, for celebrating inclusiveness and diversity, that opened in palawa kani, and closed with an anthem to another of Australia’s most important and emblematic sites. The atmosphere was one of celebration, the event held not on a day that makes a sizeable proportion of the Australian community uncomfortable. It marked, in a way, an ending and a beginning for me too and, for the first time in a while, I felt a sense of peace. And the accidental blackout gave us, like the festival itself, a truly unique experience.

Next morning, I arrived in Whitemark to find that the FIF Market had been moved to the hall in response to threatening rain. As most Island News readers seemed to have attended, I’ll try to be brief. The courtyard was ringed by food stalls offering a mouth-watering variety. Choices included satay sticks, octopus salad, fries, cupcakes and, this being Flinders, hangover-busting BBQ snags.

My lamb souvlaki was cooked by the same visiting chefs who treated our tastebuds last year: Jesse McTavish and Scott Stevenson. I’d been seated next to Scott, too, the previous evening and knew the lamb had been slowly cooking all night which explained its tasty tenderness.

As I was eating (and, I admit, sipping on a glass of Unavale wine), I was startled by the appearance of a giant bird. It was a muttonbird in giant puppet form.  A little later an over-sized tiger snake turned up, deftly operated by a dozen or so Flinders students who had been attending a giant puppet-making workshop the day or two before.

Inside the hall enthusiastic shoppers ducked and weaved amongst stalls displaying an amazing array of crafts and local products. Kim Harris’ kelp-craft reminded me that some palawa and pakana traditions continue. Her kelp-clad bottles were hugely popular. Oceans Omegas’ products too, continue traditions using muttonbird oil and other native ingredients from the islands to make an effective range for skin care. After admiring the variety of local jewellery and avoiding Emily Wood’s freshly-made toffee apples, I finally skittled through the long line of pint-sized people waiting (mostly) patiently to have their faces transformed into ferocious tigers and glittering butterflies.

There was, thankfully, time for a nanna-nap before heading to the Furneaux Tavern where Music on the Verandah was kicking off. Once again, we were treated to local and visiting musicians and – a personal highlight – Tasmanian writer Martin Flanagan talking about his work in general and, more specifically, about working with footballer Michael Long. Of the food I will merely banter ‘the burgers are better at the Furneaux Tavern’.

Sunday’s Festival finale saw the clouds disappear (more or less) and a couple of hundred meals served by Jesse and Scott who had capable assistants in their mentees Emily Wood and Marshal Clarkson. Platters of innovative salads disappeared along with the bountiful BBQ provided by FIAAI and Flinders Council although I didn’t get to see much past the long queue that stretched past the bar.

The speeches started as I was frantically helping to keep the bar restocked, while avoiding frost-bite, scrabbling around in eskies that were filled with sea-ice. One of our future elders, Tyson Wood, delivered a lyrical welcome to country before FIAAI CEO Maxine Roughley took up the microphone. Maxine reminded us that Australian Aboriginal people ‘are acknowledged as the oldest living culture in the world.’ She is a firm believer in changing the date of the Australian National Day as am I. After all, those who wish to do so, can always mark January 26th in the manner they choose. But for Maxine, as for all members of our Indigenous Furneaux community, January 26th is ‘a reminder of loss and struggle’.

Mayor Carol Cox spoke next about the aims of the Furneaux Islands Festival. FIF was inaugurated five years ago ‘to ensure inclusivity [and] to ensure all of our community can come together to celebrate our nationality, to be thankful that we are a part of Australia, a rich and peaceful country.’

There followed a mesmerising performance of giant puppets (the image of the groom’s gargantuan hat brushing the ceiling of the Lady Barron Hall will stay with me for a long time). Our kids obviously had a blast with Nathan Maynard, Felicity Horsley and Stéphane Hisler putting the show together. The afternoon and the Festival ended back at FIAAI Park, where we were treated to more music by way of – and appropriately for the festival theme – and all-inclusive jam session. It was a fine and fitting finale, worthy of the FIF motto: ‘reflect – share – celebrate’, to which I suggest the addition of one word: respect. 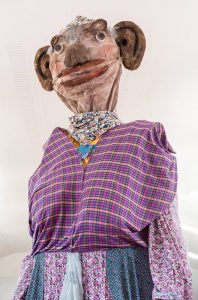