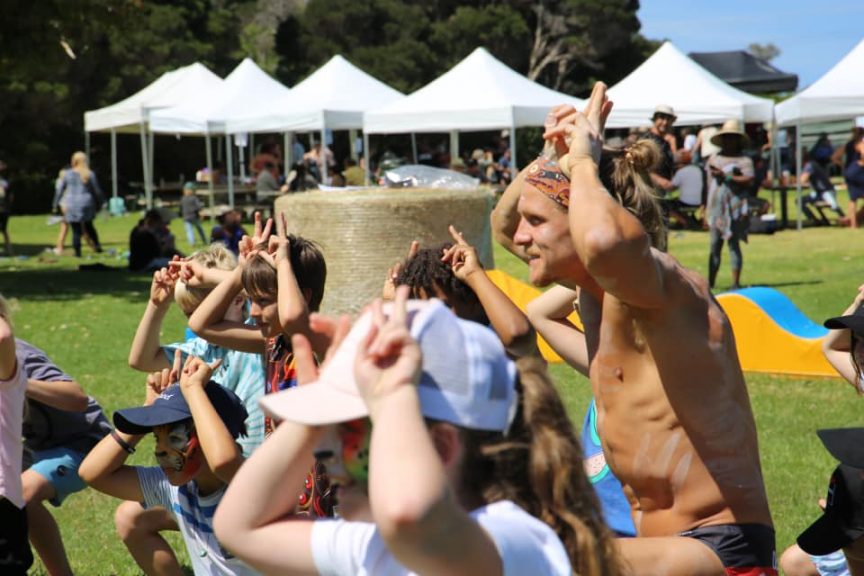 People from away often ask me what I do on Flinders Island. They’re not referring to work. As readers of the Island News know, most of us have more of a problem with choosing what not to do than finding ways to occupy ourselves. Despite the absence of Music in the Vines and the Emita Sports this January, between beach BBQs, yachting regattas and Ken’s pop-up café (see my report last edition), visitors, the Tav Shack, and the events below, I haven’t had time to do more than a jot of work.

Now in its sixth year, the Flinders Island Festival officially began on Thursday 17th with the opening of Jane Giblin’s exhibition at the Furneaux Museum ‘I Shed My Skin’. On until 17th February, it’s a fascinating visual account of the artist’s exploration of her Mills/Willis family history on the Furneaux Islands (a history of some one hundred years). She does this via a series of interpretive portraits of current and past family members (many of whom you will know) accompanied by stories in prose and poetry about Furneaux Islands’ people and places.

Friday night’s Acoustic Supper was an unabashed tribute to fire. Legs of lamb hungover hot coals to be shredded and massaged with jus. Whole snapper lay smoking in foil like huge cave-men’s clubs. Tricoloured capsicums charred on wire mesh;potatoes singed in giant fry-pans and were later rubbed with spiced butter.Tickets had sold out in record time in anticipation of both the music line-up and the three chefs Jesse McTavish, Scott Stevenson (here for their third year)and Sarah Glover. A dozen musicians variously and vigorously entertained though I’d suggest (with apologies to the others) that our own Zoe Sherriff was the hit of the night. She opened the on-stage entertainment with an impressive playlist of original songs.

The Festival is held as ‘a celebration of the shared cultural history of the community within the Furneaux Islands,’ according to the FIF website.

Well, there was community galore at Market Day which had moved this year to the Showgrounds and seemed to work well there. The Riverbank Band and AP D’Antonio were just some of the visiting musos on-stage at one end of the people-packed shed. The recent proliferation of art and craft-makers meant the wares on sale were many and varied.

The turn-out for Music on the Verandah at the Furneaux Tavern was also impressive. Grammy award-winning Lucky Oceans and his band were a highlight as was the jam session that included most of the musicians—visiting and local—that has become a traditional end to the evening. The array of burgers offered by the Tavern kitchen meant the visiting chefs and their helpers could take the night off. Tav staff weren’t so lucky, I heard later they sold 202 burgers before close.

Sunday dawned bright and clear and by the time I managed to get to the Festival Finalé, marquees ringed FIAAI Park and BBQs were sizzling. They’d been lined upend to end like a long line of dominoes. Hundreds—literally hundreds—of sausages were being expertly cooked by our councillors and G.M. The chefs were off preparing lamb, fish and beautiful salads, while yet more islanders and visitors streamed onto the grass lugging blankets and chairs. Behind the main arena, a huge jumping castle in the shape of a giraffe kept the kids occupied until ‘Deadly Ninja’ Jack Wilson shepherded them through the obstacle course he’d set up out back. They ran, jumped, skipped and skidded around the course for hours. It was like watching a kids’ version of the TV show Wipeout without the swimming pools.

The week leading up to the festival was flat-chat too. I’d tried Emily Wood’s Tav Shack,the café she opened three mornings a week in January before going off to school. It was jumping in there too! Emily offered toasties, a goodly array of tasty cakes and, I believe, a very fine coffee from her new coffee machine (I had tea). Judging by the numbers of patrons scrolling through the café, I’m not the only one who’s hoping the Shack will open again soon.

January’ s events included a film presentation. The documentary Black Man’s Houses was shown to mark the 25thAnniversary of its release. Back then it won Best Australian Film at the Melbourne Film Festival and recently 25th Anniversary showings were held in Hobart and Launceston. The Flinders Arts & Entertainment Centre’s main hall was full for the showing here.

Director, Steve Thomas, and historian Greg Lehman joined Flinders Island Aboriginal Association CEO Maxine Roughley and Lillian Wheatley, one of those who featured in the doco, for an animated post-film discussion. If you haven’t seen Black Man’s Houses, do; it’s available through the library.

After all the month’s efforts, I had no energy to try my hand at bowls last Saturday or attend the final regatta for January and fear I’ll not get to sample Taste of Flinders’ temporary restaurant at the Sports Club. While I applaud the organisers of the January events—not least Flinders Council and FIAAI—bring on February. I need a rest (and to do some work).