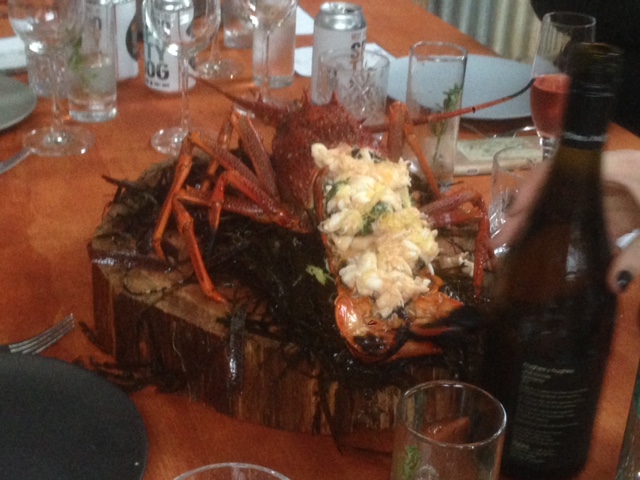 I’d been grumpy all week. Well, maybe not all week but certainly since the Thursday when I came down with an undiagnosed malaise that threatened to stop me from taking my seat at the inaugural Flinders Island Food & Crayfish Festival Long Lunch.

There were a few things about which I’d been a bit grumpy, not least because—due to factors beyond the control of even my fine plumber—the septic system still wasn’t operational at my new house and that might stop me from moving in next month.

I was a bit grumpy at myself for buying my ticket to the lunch when they first went on sale (wanting to make sure I secured my little piece of gold and to support the event early) thereby missing out on the discount recently offered to locals. I was trying not to be grumpy about the weather. Sure, we needed the rain and down it came, right on the one day when neither guest nor organiser could welcome it.

I’d also become grumpy on hearing suggestions that no locally produced booze would be served at the event—it seems a pity not to use it, too, to further promote the island. I was curious to see if said rumours were true and further grumpy that my malaise had stopped me from going to the event the previous night at the Sports Club that I later heard was such a hit with some two hundred attendees.

So, dragging myself out of bed on that cold Saturday morning, I tried to put on my happy face and to decide whether to go with my original plan to wear my new and as yet unworn dress, or go with something more weather-sensible. Of course, stupidly I chose the former.

While waiting for the bus thoughtfully offered by Festival organisers (and included in the price of the ticket), I met Leanne and John who had come from Deloraine just for the event. The mood was jolly and full of anticipation as our group of both locals and visitors boarded the on-time bus.

There was a small but amusing hiccup when it became apparent that there had been a slight communications-breakdown between the bus driver and organisers with our driver understandably thinking ‘Sophie and Blouse’s shearing shed’—the venue chosen to better suit the weather forecast than a beach—meant their one up north rather than their shed at Martin’s Hill. The locals were amused at ourselves for not picking up the mistake when the bus sailed past the venue’s driveway; we assumed there were more pickups to be done. Thus, visitors received a bonus mini-tour of the island before we arrived at the shed with still plenty of time to sample the gin from a Hobart distillery that was our aperitif. 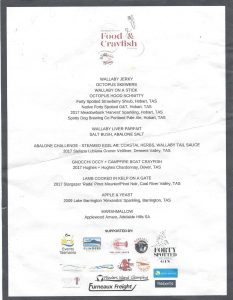 It is a gin that appeals to non-gin drinkers like myself, was mixed exquisitely in two forms (one with a strawberry tinge), and wonderfully decorated with delicious local herbs. As we greeted those who had arrived before us—I know I’m not alone when I say I attend these sorts of events even more for the social aspect than the food—chefs and waiting staff offered tender morsels of octopus and wallaby. Outside, standing a little forlornly in the rain, was a tripod frame over coals on which hung strips of tasty wallaby jerky that we could help ourselves to.

Given that a goodly portion of my school holidays was spent in shearing sheds, why was I surprised (and chilled) by the wind now whistling up my legs? I wasn’t the only woman regretting the decision to go with fashion over comfort as I sat at one of the three long tables made up of trestles crafted at the Flinders Community Shed. Many of my dining companions had come to the island specifically for this event, and we introduced ourselves as we sipped a pleasant white wine from the Derwent Valley and admired the table decorations. Over our heads hung spectacular clumps of box thorn; its abundance caused Blouse to worry that his sheep wouldn’t have any shelter until it grew back.

After enjoying an exquisitely fine dish of abalone with costal herbs and a wallaby tail sauce, I slipped outside to check out the cooking side of things. Despite the drizzle, the scene was nearly as attractive and jolly as inside. The sheep yard was filled with complementary shades of orange: crayfish were warming over steamy coals next to whole, and appropriately charred, butternut pumpkins. 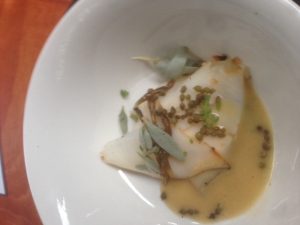 Inside the shed door, and out of the rain, chefs were making artwork. They ladled gastronomic delights into two hundred round white bowls, working up and down row upon neat row. Staff worked up and down the long tables serving up softly-textured gnocchi with octopus, while more chefs glided along the aisles bearing platters of crayfish. 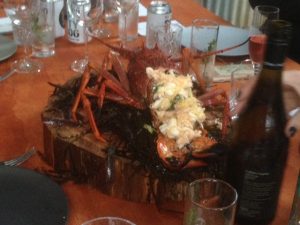 I have to admit to not being a huge fan of crayfish (growing up in a family with a half-share in a cray-boat will do that to you) but enjoyed two serves. The meat was soft and slightly smoky, equally suited to paring with the gnocchi or on its own. Chardonnay, too, is not my usual choice but the one from Dover was rather nice—I had a second glass just to be sure.

While waiting for the next dish whimsically described as ‘Lamb cooked in kelp on a gate’, I chatted to Peter-the-pilot who told me that he’d not only flown in lots of the guests but brought his own family across from Bridport for the event.

The lamb arrived in individual servings accompanied by platters of pumpkin. I’m guessing it was the kelp that provided just the right amount of salt to bring the pink lamb to life. It was tender and juicy, and locals and visitors alike washed it down with more than one glass of a Pinot from the Coal River Valley. There were later reports of dishes arriving on the beautifully set tables cold, but mine were fine. 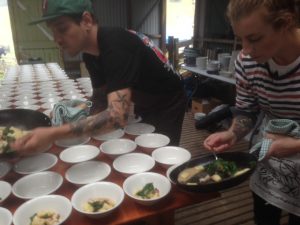 I was busy exchanging news with our soon-retiring mayor, me hopping from one foot to the other in an effort to keep warm (idiot), while dessert was served. Now, I’m not sure whether my empty place wasn’t allocated a bowl, or whether someone snaffled mine, but I missed out on what some reported as their dish of the day. I was then too busy trying to find a fresh bottle of wine for our table (any of them would do) when the marshmallow was served. I’m sure that was nice too.

Running out of wine turned out to be an effective method for the surely-exhausted organisers ejecting us into the cold rainy afternoon without too much grumbling. As we boarded the buses that would return us north and south we farewelled the new friends we’d made, many of whom promised to return to our island home.

More than a few of us continued to be festive at the Furneaux Tavern where a roaring fire warmed me nicely and I realised that although many of the vexes that had made me grumpy hadn’t exactly been solved, this pleasant day with friends and food had made them thorns for another day. 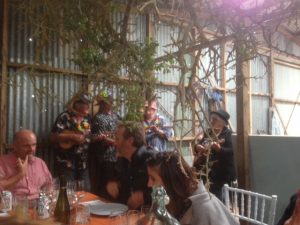