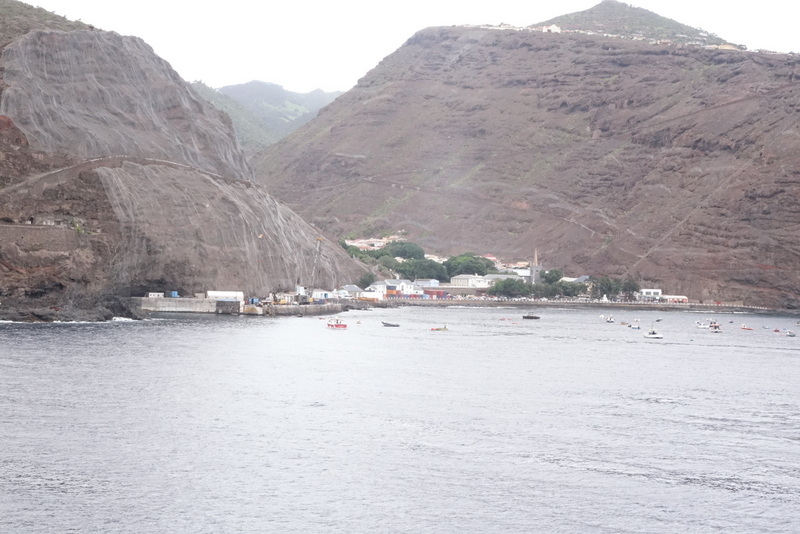 Here are words a writer should probably never write: this place is very hard to describe. But let me try even though I’ve not much time — because although it’s a small island, there’s lots still to do before my ship leaves for Ascension Island, two days’ sail to the north.

Jamestown is the ‘capital’ of the island. The town is in a deep, steep valley with rock-ridden cliffs towering each side of it (so high they are fort-sites). The sides of the valley are so rocky, and steep, that huge sheets of steel mesh cover them to (try to) prevent landslides from destroying the shops, offices and homes below. Think rocky escarpments corseted with chainmail. Very bare and barren, nothing much can grow on them but the odd cacti or super-hardy wildflower. The entire town seems to tip towards the ocean. In the capital I feel overwhelmed, and I can’t get away from the feeling that the cliffs are toppling towards me. For three entire weeks, I have had a feeling that is a cross between vertigo and sea-sickness: feeling like I’m not on land, but still on a ship.

The south-west of the island is green and lush. Driving around it reminds me of driving around Ireland – green with old stone fences and tiny windy roads although with considerably fewer sheep and cattle.

In the stony ground the Millennium Forest, they are trying to reforest with 10,000 Gumwood trees where the forest has been harvested of its wood.

In the region south, called ‘Levelwood, which is only my idea of ‘level’ for a slim stretch below three peaks, there are fern forests, gum forest and flax forests. The latter prevent many the slopes from tumbling down. In ‘Longwood’, which is where Napoleon was mostly kept when he was held on St Helena, it always seems to rain. This is stark contrast to the regions of the north-east, around the shiny new airport as well as the north-west where the landscape reminds me of the moon but in mostly brown hues. The colour palate of some of these ridges that march their way to the ocean like foot-soldiers at war is an incredible mix of browns, yellows, and sometimes something green pokes through. They can meld one next to the other like those jars of coloured sands many of us demanded our parents bought when we were kids.  never both in same view.

St Helena is a volcanic island and I wonder what it looks like below. I did manage to tag along on one dive and the fish certainly like it here but it didn’t help me imagine what’s in the real depths below (more research required). Now, off to Ascension Island.